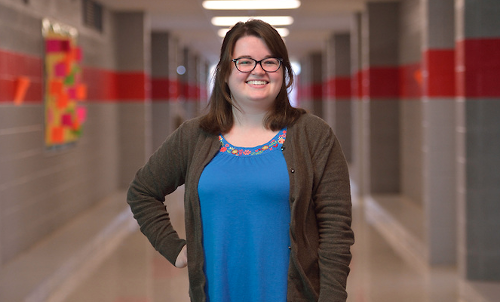 Hanna Olivier, an alumna of the University of Mississippi’s Mississippi Teacher Corps is one of 10 Mississippians recently named an American Graduate Champion by Mississippi Public Broadcasting (MPB).

Olivier (MA 12), who is dean of students at North Panola High School in Sardis, was nominated for the honor by her assistant superintendent for her role in helping increase the school’s graduation rate from from 49 percent to 78 percent over six years. At a ceremony held in Jackson in December, Olivier was honored for her work during the Stop the Drop Summit.

“The success at North Panola has been a team effort,” said Olivier, who has taught at the school since 2010. “This honor raises awareness of how different communities and people within them are putting children first and working toward a Mississippi where every child can graduate high school.”

American Graduate Champions are individuals honored for their ongoing commitment to helping students graduate from high school. Supported by the Corporation for Public Broadcasting, MPB is one of 80 public media in 30 states working to help communities implement solutions to the U.S. high school dropout crisis.

Currently, less than 85 percent of U.S. children graduate from high school, according to data from the National Center for Education Statistics.

As dean of students, Olivier’s job at North Panola is to foster a positive school culture among faculty, staff and students. However, this is but one hat Olivier wears at the school where she also teaches high school science and Latin and sometimes hosts ACT workshops for students—including occasional practice tests on Saturdays.

Last year, North Panola was rated a B school by the Mississippi Department of Education for the first time in more than five years. North Panola faculty are actively working toward achieving an A rating.

“We are proud of the great work Ms. Olivier has done and proud to call her an alumna,” said Teacher Corps director Dr. Joe Sweeney. “North Panola has provided a supportive environment for our current and former participants and that makes a big difference. Our participants do well in places like North Panola, where they are given a situation in which they can be successful. The end result is having great people like Hanna doing great things. Increasing graduation rates is a win-win for students and the state of Mississippi.”

Established in 1989, the Teacher Corps is an alternate route program that prepares college graduates to teach and succeed in secondary, critical-needs schools across the state and has produced more than 600 new teachers in its history. Currently, there are 50 participants in the program working at 18 schools across north and central Mississippi.

The program provides job placement with full benefits as well as scholarships for participants to complete a master’s degree in curriculum and instruction from UM.

“For me, the best part of this honor is the awareness it brings,” Olivier said. “As a group, only a few of (us champions) were full-time educators. It goes to show that anyone can make a positive difference in their community. When a child graduates from high school, it makes a positive impact on everyone.”

For information about other 2015 American Graduate Champions honored by MPB, or to make a nomination for a future champion visit: www.mpbonline.org.

Story by A. M. Abernathy